What The Frack? A New World Order Is Here!

By Steve McKnight
Oil. The world depends on it. Kingdoms have become enriched by it. Wars have been fought over it.

It’s well known that the Middle East is a major supplier of ‘black gold’, and that the US is a major importer. Well, until now…

You see, the Saudi Kingdom has just decided to *drop* its oil export price in an effort to ‘take out’ the competitiveness of the new and emerging home-grown US oil boom.

This small step for Saudi is a giant leap for world oil, as evidenced by the correction in oil prices illustrated in the graph on the below. Further drops to below US$70 a barrel are forecast in the near future. 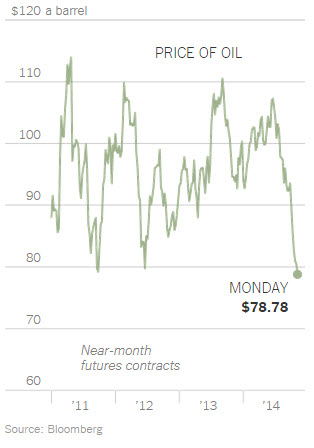 The Middle East has primarily two natural advantages: geographic strategic importance, and oil. You could add in tourism as a distant third (thanks to Dubai), but then again, maybe not. So in regards to economic prosperity, it’s oil, oil and more oil.

Kuwait and Saudi Arabia, are, by most standards, the most ‘western orientated’ of the Arab nations, and because their future economic prosperity depends on it, have huge political motivations connected with oil exports, and in particular, with oil exports to the US.

Remember the Kuwait oil wells on fire at the start of the Iraq invasion? America to the rescue… Why? Oil, and perhaps the ability to rebuild what they destroyed (thank you Mr. Cheney), and finally a little humanitarian intervention (any weapons of mass destruction been found yet?).

1. The emergence of other oil producing nations, for instance Africa, that have added to world supply, and

2. The fracking revolution unfolding in the US right now.

You may not know it, but the US is now the world’s biggest oil producer, overtaking Saudi Arabia. Really! If you don’t believe me you can click here to read more.

Now, Americans are usually a polite and agreeable bunch when they want something, but they tend to turn the cold shoulder towards you if you are, er, how shall I put it delicately…? Of little future economic interest to them.

What Does It Mean?

The truth will come out in the passage of time, but the short answer is lots! Here are a few off that should happen quickly:

1. Lower fuel costs – not just in the US, but across the world as exports that were targeted for the US seek alternate markets. This in turn will lead to less inflationary pressure as oil is a big component to the cost of living. Already this week the cost of gas in the US has fallen sharply… by as much as 10 cents a gallon.

2. A much stronger American economy and currency. Put away your ‘I Love China’ flag because the era of American dominance might last a little longer yet. Already the US unemployment rate is lower than before The Great Recession, although the stats are a bit rubbery. What isn’t made up is that the floodgates of ‘home grown’ prosperity will open if (when?) the US starts exporting oil (Click here to read more about this!)

3. Less US intervention in the Middle East, with diplomacy being more politically than economically motivated. Who knows, without the need (or perhaps desire) to be the world’s policeman in the Middle East, America might finally get around to repaying some of the colossal debt it’s racked up.

As always, with change such as this there is a massive redistribution of wealth – both macro and micro economically. But let’s focus on you, shall we?

If it were me and I owned energy stocks in general (and oil stocks in particular), I’d be reassessing the validity of my investment strategy and my expectations of future performance.

In respect to real estate, the impact will be embryonic until it filters through to personal household finances via a lower cost of living leaving people with more money to justify higher debt. When this happens the natural affordability ceiling on house prices will rise.

Finally, don’t trade in the V8 for an electric car just yet.

In summary, the simple point is this: we live in very interesting times, and this seemingly small pebble – a drop in the price of oil in Saudi Arabia – will result is some rather large and worldwide ripples!

What do you think? Your feedback and comments are most welcome.