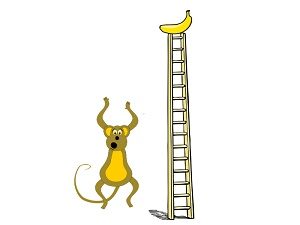 The following experiment happened in 1967 that may relate directly to how much income you and the people around you make. The experimenter put five monkeys in a large cage. High up at the top of the cage, well beyond the reach of the monkeys, was a bunch of bananas. Underneath the bananas was a ladder.

The monkeys immediately spotted the bananas and one began to climb the ladder. As he did that; however, the experimenter sprayed him with a stream of cold water. It seems cruel, but these are the weird things they do in the name of science. Next, he proceeded to spray each of the other monkeys.

The monkey on the ladder scrambled off. All five monkeys sat for a time on the floor, wet, cold and bewildered. Soon, though, the temptation of the bananas was too great, and another monkey started to climb the ladder.

Next, the experimenters removed one monkey and introduced a new monkey to the cage. Spotting the bananas, he naively begins to climb the ladder. The other monkeys pull him off and beat him.

Here’s where it gets REALLY interesting. The experimenter removed another one of the original monkeys from the cage and replaced him with a new monkey. Again, the new monkey begins to climb the ladder and, again, the other monkeys pull him off and beat him – including the monkey who had never been sprayed. 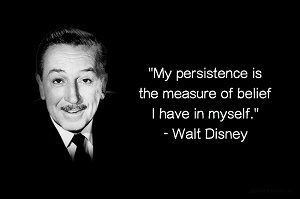 I can’t tell you how many people I have met that are extremely successful who have told me that they were often talked out of their idea by other well meaning “monkeys.” Walt Disney was turned down by over 300 banks when he went to them with his idea for Disneyland. Many people told him it was madness, but his persistence paid off.

Be careful you don’t have an inner monkey inside you, too. A lot of people think that making more money is about how much you know. They go to seminar after seminar, gathering huge amounts of knowledge. Yes, knowledge is important; however, what you know is not the whole picture – it’s who you are.

Most of becoming wealthy is made up of your beliefs and habits. I call this your “structure.”  Richard Branson probably can’t fly a 747, but he does own an airline. There are a lot of people within Virgin that know more about running the airline than Branson. In other words, they know more strategies, but Branson is the one with the money.

Remember, the STRATEGIES you learn are important, but your STRUCTURE is priceless.

Brendan Nichols has the audacity to believe you should work a little for a lot and shows his clients how he averages three months holiday a year. He is financially independent and a best selling author, published by the giant publisher, Harper Collins. He has appeared in the media dozens of times and about a million people watched an exclusive ABC television documentary on him. He has trained tens of thousands of people, on three continents. He originally started from nothing and had several successful businesses before he was an educator. One of these businesses was a highly successful Real Estate project marketing company, where he launched major campaigns. Brendan’s specialty is showing you the steps to make more money and have an amazing life in the process. To get more information, go to www.brendannichols.com.