Australia was one of the only two OECD countries that did not record a recession during the GFC—the other being South Korea. In response, the RBA and Treasury took to describing the “Global Financial Crisis” as the “North Atlantic Financial Crisis” (see “Reserve Bank warns of interest rate growing pains” [SMH February 20 2010], or footnote 21 in this speech by Glenn Stevens), which implied that the GFC was caused by factors that were not relevant to Australia.

Six years later, the consequences of this difference in the trajectories of private debt are starkly evident: the USA’s private debt is now 15% lower than when the GFC began (August 2007), while South Korea and Australia have climbed: South Korea’s debt level is 23% higher while Australia’s is a whopping 36% higher. 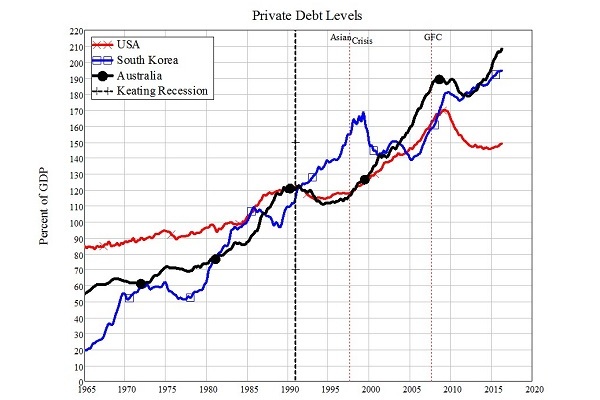 I’ve marked the Asian Crisis of 1997 and Keating’s “Recession we had to have” on the next chart to make a point that I’m used to conventional economists rejecting, without examining the evidence: that recessions occur when credit (which is the change in private debt) either drops substantially, or goes negative. There’s no denying that Australia and South Korea avoided recessions during the GFC, but equally there’s no denying that they had recessions in 1991 and 1997 respectively. In each case, credit went negative: 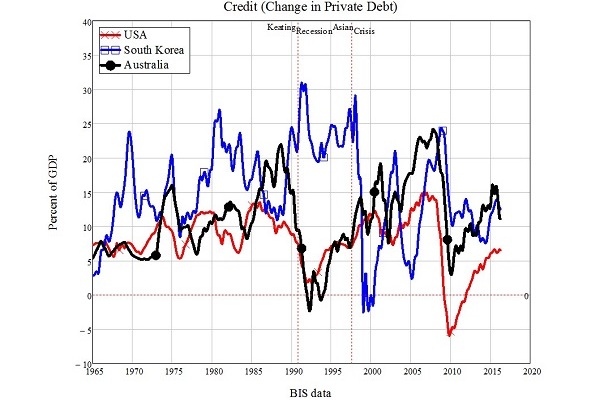 Now credit is declining in Australia again, and this—as well as the unwinding of the minerals boom—is behind the recent “unexpected bad news” on employment in Australia. But hey, let’s get to the important issue: what’s going to happen to house prices?

The supply side of housing includes both the turnover of existing properties, and the supply of new properties onto the market. On the demand side, the money demand for houses comes overwhelmingly from new mortgage debt. Divide this new-mortgage-credit-financed demand for housing by the price index and you have the flow of demand. If the flow of demand exceeds the flow of supply, then there will be pressure for prices to rise.

A bit of mathematics results in an equation that expresses the rate of change of house prices as a function of both supply and demand, as both sides of the “Is there a bubble?” debate accept. However, what may be unexpected is that this equation includes acceleration terms for both mortgage debt and housing supply (see Figure 10, if equations are your thing).

The equation implies that for house prices to rise, the acceleration of mortgage debt must be positive, and greater (when deflated by the current monetary value of transactions on the housing market) than the supply-deflated sum of the rate of change of the existing housing stock up for sale, plus the rate of change of new construction (and thus the acceleration of the housing stock). 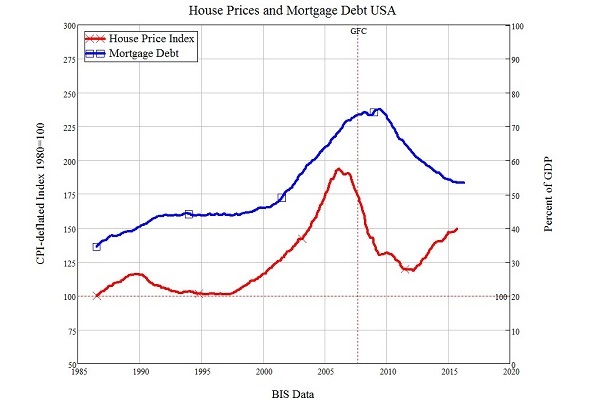 What about Australia? Here both total mortgage debt has climbed almost without pause since 1987, to be five times higher, relative to GDP, than it was thirty years ago. Real house prices have risen almost as relentlessly, to be three times what they were thirty years ago. This much is different to the USA—but hardly reassuring. 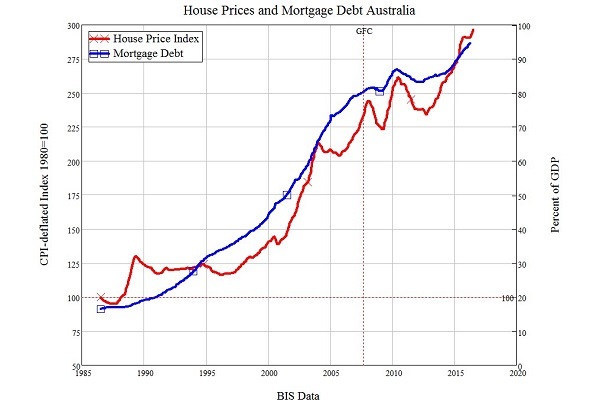 As it stands, the equation is agnostic about what causes what: rising prices could cause mortgage debt to accelerate, for example, or accelerating mortgage debt could cause house prices to rise. If the former were true, then the “No bubble” case would have legs: something else (such as rising population due to migration) would be causing rising prices, and mortgage debt would just be (pardon the pun!) the price you have to pay to get in on the market.

So which is it? Do rising house prices cause rising mortgage credit, in which case only addressing the underlying causes of rising prices—such as population growth—or increasing supply can bring the rise to a halt? Or does rising mortgage credit cause rising house prices, in which case targeting the banking system’s proclivity to lend could end the bubble—and it could end of its own accord as mortgage debt stops accelerating?

Proving causality is notoriously difficult. The primary test for it in economics (“Granger causality”) strictly applies to linear models, and is therefore likely to return “false negatives” for nonlinear expressions like this equation—that is, to conclude that there is no causal relationship when in fact there is. So I was surprised when a colleague applied that test to the US data, and concluded that according to Granger causality, the causal relationship was definitely from mortgage debt to house prices, and not the other way around. The same result is likely to apply to Australian data, as we’ll check soon.

If so, Australian house prices have risen as much as they have primarily because of the unholy alliance between the banking sector and the political class, which has encouraged Australian households to continue leveraging themselves into mortgages ever since lending to the business sector hit the wall back in the “Recession we had to have” (see Figure 9). Since then, the change in mortgage credit (which is the acceleration of mortgage debt) averaged ¾ of a percent of GDP per year till the GFC, and about ½ a percent of GDP till now. Like a lead-footed car driver who hits the accelerator more often than the brake, this has taken Australian mortgage debt a long distance from its starting point of about 20% of GDP when the Keating Recession began to almost 100% of GDP now. 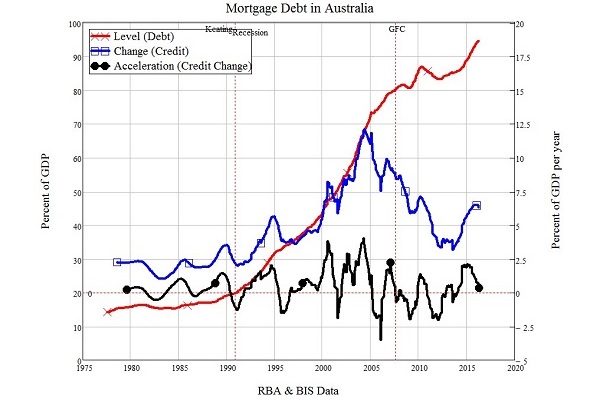 That trend cannot continue for much longer. Australia already has the world’s highest household debt to GDP ratio (tying for first place with Switzerland at 125.2%), and the second highest ever recorded (Denmark hit the world record level of 140.2% of GDP in 2010; it has since fallen to 123%, even though mortgage rates there are now effectively zero). The RBA might prolong the game by dropping rates further, but there are only six throws of that dice left before the government runs out of means to entice Australian households to keep on borrowing. 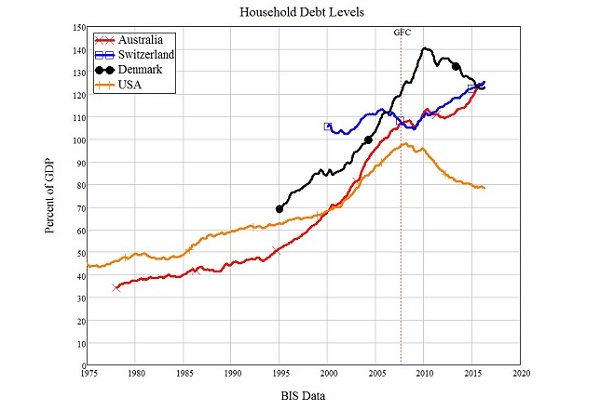 Long before Australia reaches its maximum household debt level, housing demand from mortgage credit will be well below housing supply, driving house prices down. The Australian house price bubble might still be saved by Chinese demand, if Australia encourages more foreign buying for the sake of property owners rather than limiting it for the sake of would-be local buyers as Vancouver has done. But with China cracking down on hot money outflows, as seems the case after the Crown Casino arrests, that’s relying on a very dangerous whale to save a very insignificant minnow. China could crush the market by forcing its nationals to repatriate money tied up in overseas property, just as easily as it could allow our bubble to continue. I wouldn’t take a bet on it. 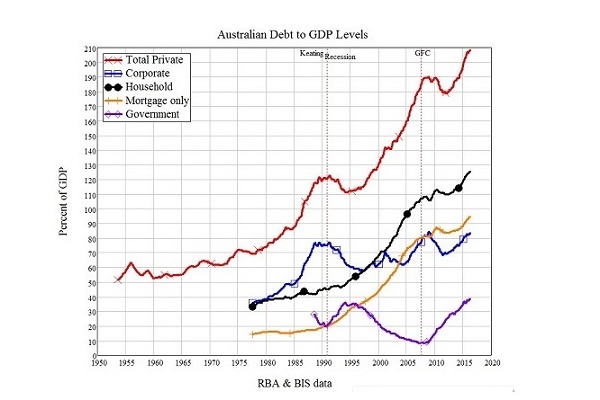 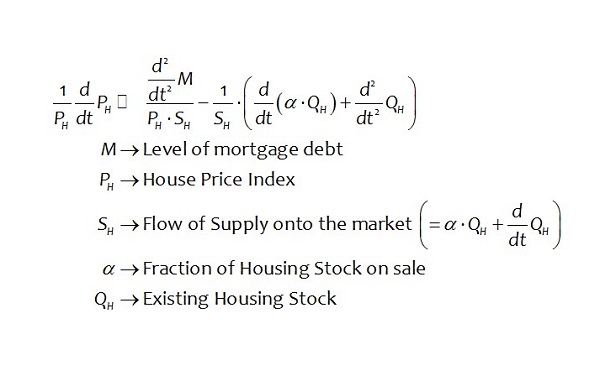 Steve Keen is an Australian-born economist and author who now resides in the UK. He is Professor of Economics at Kingston University in London, and is a prominent critic in Australian media of banks over-lending to finance speculation in the housing market. His next book Can we avoid another financial crisis? will be published by Polity Press in April 2017.
www.debtdeflation.com/blogs
www.profstevekeen.com
www.ideaeconomics.org
@ProfSteveKeen