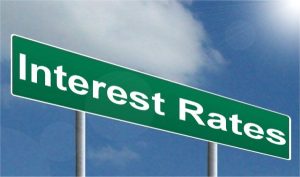 I think she’s bluffing. I’ve said for months that I believe this rate rise is only symbolic. Financial markets have become addicted to cheap credit, and central bankers know that long-term, higher interest rates would dramatically reshape the world economy.

My prediction, for what it’s worth, is that the Fed will change course in the not-too-distant future, and return interest rates to zero. They’ll blame the policy shift on some new economic data or unforeseen world event.

But that’s no guarantee of low borrowing costs. There are economic forces outside of the control of the Fed, the ECB and the RBA, that can push interest rates higher. Those forces are in the free market, which would have already pushed rates higher if our regulators weren’t artificially suppressing them.

Given enough time, the free market is likely to win.

The RBA vs. The Free Market

Most people assume that interest rates are purely the result of a central bank decision. The RBA sets the rate, and voilà – 2.0 percent. While this seems to be true, the RBA’s target rate is actually dependent upon a manipulation of sorts in the bond market.

In summary, if the RBA wants to change the cash rate, it must manipulate the supply and demand of bonds, which represent debt in the economy. To lower the cash rate, it buys more bonds to drive up the price, which then lowers the yield.

By effectively driving down the yield on bonds, the RBA ensures that banks borrow from and lend to one another, at or near the new lower target interest rate. The idea is that the banks will then pass on that savings to their customers in the broader economy, and interest rates at large, will fall.

In order to buy bonds and drive down interest rates, the RBA must create new money out of thin air – or digitally on a server, to be precise. This increases the money supply and drives down the perceived value of our dollars. As long as nothing crazy happens in the broader economy and people maintain faith in our currency, the RBA can manipulate the credit market to its heart’s content.

But as I said before, the RBA, like every central bank, must work within the confines of a free market.  The free market can push interest rates higher, even when regulators are trying to suppress the cost of debt.

Fed President Janet Yellen recently admitted, “The Federal Reserve’s control over longer-term interest rates is more indirect and more limited than its influence over the level of the federal funds rate.” In Yellen’s words, central banks can influence rates in the short term, but they can’t necessarily control them over the long term. The market forces at work are just too great.

In light of this harsh reality, here are four economic shifts that could someday test the limits of the RBA’s power and push our interest rates higher:

1. If Inflation Spikes Out of Control 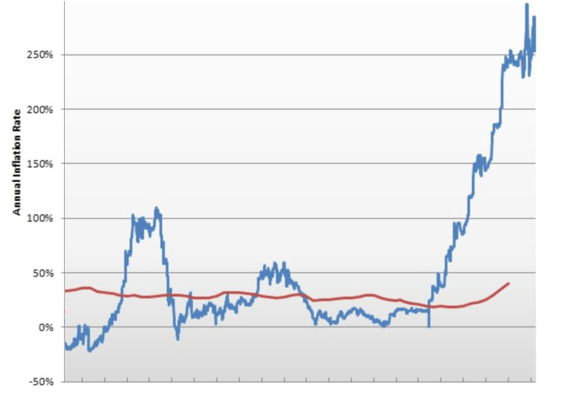 The RBA’s stated goal is a target inflation range of two to three percent per year. Our regulators believe if things get a little bit more expensive each year, it’s a sign the economy is healthy and growing.

Unfortunately, you can have too much of a good thing. Many times in history, the creation of new money has led to undesirable levels of inflation. Here are some of the worst examples:

Western economies face a similar risk today, although perhaps not to the same extreme. If the RBA were to continue to increase the money supply indefinitely, we would eventually experience higher than normal inflation. It’s an unavoidable reality of the economics of money. Of course, we all hope our regulators will eventually raise rates to prevent this, even if it means some short-term pain.

If they lack the political will to rein in debt, inflation will spike. As a result, lenders would force rates to rise, regardless of the RBA’s monetary policy. Investors will then demand compensation for the loss of the buying power of their money. No sane lender would agree to be paid back with worthless future dollars.

2. If a Fiscally Irresponsible Government Borrows Into Oblivion 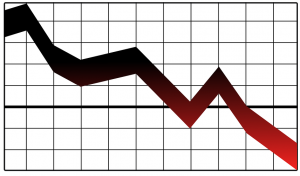 Governments borrow by issuing bonds. A bond is a promise to pay back a defined sum of money within a specified period of time at a particular interest rate, or yield. Initially, investors buy those bonds on the primary market upon issuance, but then they are traded between investors on the secondary market.

The more governments around the world borrow, the greater the supply of bonds there are in the primary and secondary markets. This greater supply of bonds means more secondary sellers are competing for fewer buyers. When buyers have more choices, bonds get cheaper, which means yields go higher.

Because bond prices and yields have an inverse relationship, when prices of bonds go down, the yields on those bonds go up. Yield is essentially another word for interest rates. As yields rise in the bond market, there will be a knock-on effect of higher interest rates in the broader economy.

Unless Australia can slow down the debt clock – and that doesn’t appear to be happening anytime soon – market forces will eventually push interest rates higher. An oversupply of bonds would guarantee that.

3. If Investors Flee Bonds for Safer or Higher Yielding Assets

Investor demand for bonds also has a significant influence on interest rates. Smart investors are always looking for the highest return for the least risk, in the least amount of time.

Because interest rates have been so low for so long, bond prices have risen dramatically. Investors have been happy to receive an exceptionally low yield on most government bonds because of the perceived low level of risk, and because there are few other “safe” options.

But bond values can only go so high. Eventually, the bond bubble will burst, and investors will flee to other assets, whether seeking higher returns or greater safety. When that happens, prices will fall and yields will rise. The impact will be higher borrowing costs in the overall economy.

Similar to a household, a government can only sustain so much debt, given a particular level of income or tax revenue. Nations with low incomes or high levels of debt represent a greater credit risk to its borrowers, the bond purchasers.

Agencies like Moody’s and Standard & Poor’s issue credit ratings to various countries, which measure the borrower’s ability to repay, as well as the risk of default. A country with a triple-A rating is an extremely low risk, and as a result would pay a low interest rate. On the other hand, investors demand higher yields from bond issuers with low credit ratings. 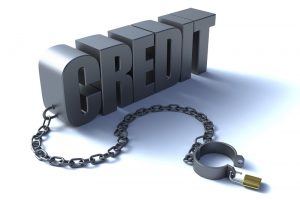 Photo by Chris Potter / CC BY

For example, Australia has the coveted AAA credit rating with Standard & Poor’s and currently pays less than three percent on a 10-year bond. South Africa, on the other hand, has a BBB credit rating, so it pays almost nine percent. Therefore, the credit rating of a nation significantly impacts its borrowing costs and potential for economic growth.

While Australia has a high rating currently, it also continues to run a budget deficit. We have yet to see if any politician has the political will to change this. Even if they did, they wouldn’t likely stay in power for long.

Over time, governments that keep borrowing will reach a tipping point of indebtedness where only two options remain. Option one is to default, which would be both embarrassing and painful, so it’s unlikely. Option two is to inflate the currency, and then repay the debt with worthless money. That is just as painful, but less embarrassing, because politicians can blame the inflation on something other than their own fiscal irresponsibility.

Why Should You Care?

Higher interest rates would not only have a profound impact on our economy and the value of real estate, but also upon your cash flow. It’s our job as investors to understand the market forces that influence borrowing costs that, in turn, affect homebuyers’ access to credit for housing.

It’s anyone’s guess how long central banks will be able to suppress interest rates and keep asset prices inflated. We may continue on the current path for many more years, or maybe not. If we can see the warning signs before an economic shift happens, we will be in a better position to make wise investing decisions.